Seaplanes are generally a modified landplane. Seaplanes are normally supported in the water by two pontoons, or floats. The floats often replace the wheels of landplanes. Seaplanes have either straight or amphibian floats. Aircraft with straight floats have no wheels and cannot operate on land. Aircraft with amphibious floats have retractable wheels and are at home on land and in the water.

Seaplane Differences Compared to a Landplane

Overall, a seaplane handles similar to its landplane cousin, but the following are key differences.

As landplanes do not operate on water, there are several considerations when transitioning to seaplanes. These differences include, but are not limited to, the following.

Most seaplanes have the same airframe or major components as their landplane equivalent. However, there are some key items to consider.

What makes a seaplane a seaplane are the floats. All seaplane floats share certain characteristics. They are built with a step—a break in the hull’s profile—to facilitate takeoff. The step facilitates a takeoff by reducing the amount of the float that is in the water, reducing the overall drag and allows the pilot to vary the pitch attitude during the takeoff run. The top of the float is called the deck. Retractable water rudders at the aft of the float help steer in the water. Definitions of float parts are listed below showing amphibian and straight floats. Many of the same terms were not repeated for each design. Bold items are included in both types of floats. 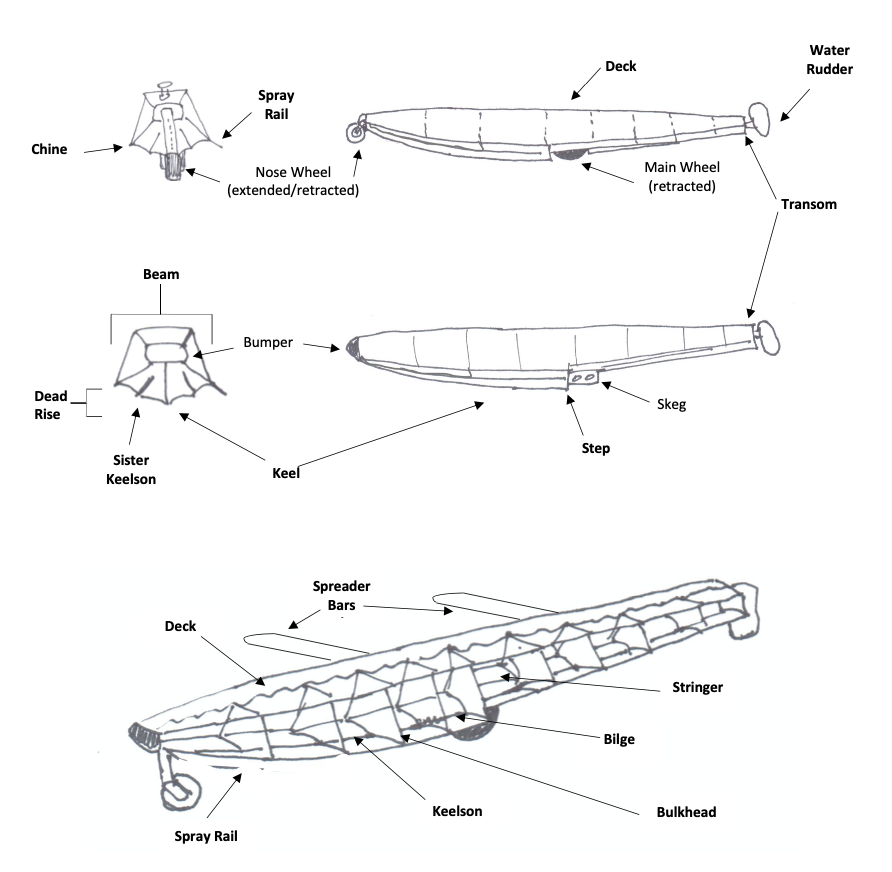 The shape of the float bottom can make a significant difference in the handling characteristics of the seaplane. For example, a shallow V bottom float would take off quite well in smoother water but would be extremely rough in any other conditions. A deep V bottom float would provide good rough water capabilities but could likely not get out of the water quickly in calm conditions. Normally, the float design is a tradeoff of these characteristics, providing “good” capabilities in most environments, the scalloped design being one of these.

By regulation, floats must provide a safety factor of 80%. The floats must be able to support 180% of the takeoff weight. The regulations further state that the floats should have sufficient margin so the seaplane will stay afloat at rest in calm water without capsizing in case of a likely float or hull flooding. (14 CFR 23.2310 Buoyancy for seaplanes and amphibians.) To be certified, the floats must be able to handle applicable structural design loads. (14 CFR 23.2230 Limit and ultimate loads) The manufacturer determines the structural design loads resulting from taxi, takeoff, landing, and handling conditions on the applicable surface in normal and adverse attitudes and configurations. (14 CFR 23.2220 Ground and water load conditions)

In some cases, the allowed takeoff weight will be different than on land. For example, a Cessna 185 on the original EDO 2790 (2790 / .9 = 3100) amphibian floats are limited to 3100 lbs. on water, less than the 3350 standard useful load for the plane on land. In such a case, the airplane would be considered under floated.

Amphibian: A seaplane with retractable wheel-type landing gear that can be extended to allow landings to be made on land.

Auxiliary Fin: An additional vertical stabilizer installed on some float planes to offset the increased surface area of the floats in front of the center of gravity.

Beam: The transverse dimension of a float or hull.

Bilge: The lowest point inside a float, hull, or watertight compartment.

Bulkhead: A structural partition that divides a float or flying boat hull into separate compartments and provides additional strength.

Buoyancy: The tendency of a body to float or to rise when submerged in fluid.

Dead Rise: The difference in height between the chine and the keel at any given cross section of the float.

Deck: The top of the float, which can serve as a step or walkway. Bilge pump openings, hand hole covers, and mooring cleats are typically located along the deck.

Displacement: The volume or weight of the water displaced by the float or hull.

Floatplane: A seaplane equipped with separate floats to support the fuselage well above the water’s surface.

Floats: The components of a floatplane’s landing gear that provide the buoyancy to keep the airplane afloat.

Keel: A strong longitudinal member at the bottom of a float or hull that helps guide the seaplane through the water, and, in the case of floats, supports the weight of the seaplane on land.

Keelson: The internal longitudinal member in the center of the bottom of the float, to which the keel is attached.

Spray Rails: Metal flanges attached to the inboard forward portions of the chines to reduce the amount of water spray thrown into the propeller.

Spreader Bar: The horizontal transverse member running from one float to the other in most seaplanes.

Step: An abrupt break in the longitudinal lines of the float or hull, which reduces water drag and allows the pilot to vary the pitch attitude when running along the water’s surface.

Stringer: A longitudinal structural member in a float or hull.
Transom: As it applies to seaplanes, the rear bulkhead of a float.

Water Rudders: Retractable control surfaces on the back of each float that can be extended downward into the water to provide more directional control when taxiing on the surface. They are attached by cables and springs to the air rudder and operated by the rudder pedals in the cockpit.

What is the purpose of the step on the floats? Reduces drag on the water after the plane gets on the step. Basically, the back half of the float is out of the water. The step also allows the pilot to vary the pitch attitude during the takeoff run.

How can the pilot tell if an aircraft is equipped for float installation? The aircraft’s type certificate or supplemental type certificate (STC) will define if, and what type, of floats may be installed.

What is the downside of being “over-floated”? There will likely be a performance penalty due to the larger size of the floats. This penalty will be caused by excess weight and additional drag.

What are some benefits of straight floats over amphibious floats? The primary benefit of straight floats is that they are lighter, usually stronger in the nose, and less maintenance. The lighter weight allows for more useful load. Given that there is no wheeled gear, there is less maintenance and the nose of the floats are usually more resilient to damage, such as when nosing into a dock. However, straight floats require the aircraft to operate in areas with seaplane bases or other ways of getting fuel, loading, maintenance, etc.