Seaplanes are often loud. They are regularly in the proximity of non-aviation people, such as lakefront residents, vacationers, etc. In order to minimize conflict with residents, it is best to minimize the noise created by the plane. The takeoff is the primary phase of flight that receives complaints. With a few simple steps, the noise can be reduced significantly. Safety is a primary concern, so only the appropriate procedures below should be applied if it is safe to do so in the current situation. When safety permits, the pilot can:

Seaplanes have often been modified with Supplemental Type Certificates (STC)s or field approvals in addition to the float installation. Common modifications include bigger engines, more efficient propellers, vortex generators, wing extensions, etc. These modifications may significantly alter performance or require nonstandard procedures. It is a good idea to create checklists specific to the seaplane being flown. Changes to performance and procedures will be listed on the relevant STC.

Status of Seaplanes as Vessels

Use of Seatbelts and Shoulder Harnesses in Seaplanes

Seaplane pilots and passengers pushing off from a dock or mooring the plane are exempt from the requirement to wear a seatbelt. However, a seatbelt must be worn during takeoff and landing, and enroute if in a pilot seat, see 14 CFR 91.107.

Avoid taking off or landing in a boat wakes. Large boats may produce swells that should be avoided. Crossing a wake during step taxi can cause the plane to skip. Add back pressure and power to correct for a skip. Wakes are best crossed at a 45 degree angle during idle taxi.

Seaplanes have to share the water’s surface with boats. Remember that boat operators will not be familiar with the limitations of seaplane maneuverability. Seaplane activity will often draw boats to an area. Do not follow a boat pulling a skier; the skier may fall. Expect jet skis to move unpredictably. Always follow the right-of-way rules as outlined in the next section.

Rules of the Road

A seaplane pilot is more likely to deal with boat traffic than the skipper of a boat is to deal with seaplane traffic. Give watercraft a wide berth, they are not looking for airplanes and do not understand a seaplane’s abilities and limitations. When landing, the aircraft should give way to the vessels on the water.

When operating on the water:

Brief the passengers on seaplane safety. A sample briefing is located in the appendix. The briefing should be modified to the specific type of operations, aircraft, etc.

The seaplane pilot must adhere to the same navigation rules as other watercraft. Below is a brief overview of key navigational rules.

This concept is put together on the following example of an inland waterway. 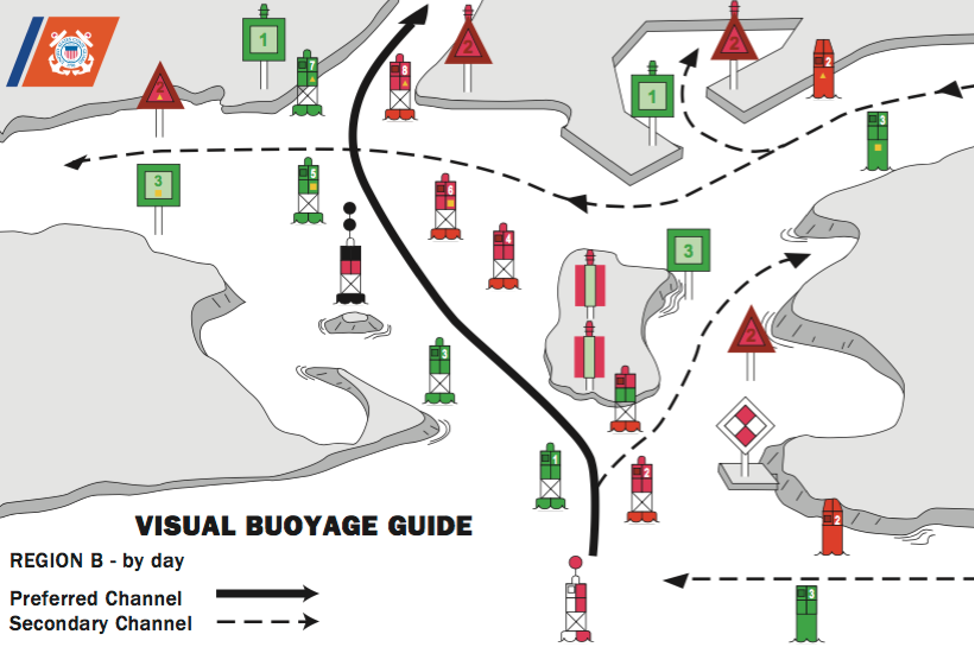 Seaplane operations are likely to require the use of tying knots, such as when docking. There are several knots that a seaplane pilot should know how to tie. These include the square knot, half hitch, bowline, and cleat hitch. Instructions on tying these knots are included in the appendix.

Buoy: Floating objects moored to the bottom to mark a channel, waterway, or obstruction.
Can Buoys: Cylindrical buoys marking the left side of a channel for an inbound vessel. They have odd numbers which increase from seaward.

Nun Buoys: Conical buoys marking the left side of a channel for an inbound vessel. They often have even numbers that increase as the vessel progresses from seaward.

What are some ways to limit the noise of a seaplane? Reduce the RPM as soon as feasible, climb out over the water, and minimize any low altitude flying over residents. Safety is a primary concern, so only apply the procedures if it is safe to do so in the current situation.

A seaplane is taxiing a seaplane on the water and it is on a collision course with a boat. Who has the right away? Both vessels should turn to the right.

While approaching to land on a small lake and there is a boat on a track to be in the approach path. Who has the right of way? The boat has the right away.

Return to Characteristics of Seaplanes