With seaplanes, crosswinds can often be avoided as there is often room to take off or land into the wind. However, if a crosswind takeoff or landing is needed, there are several options for taking off and landing with a seaplane on the water. These various methods and differences are detailed below.

The primary obstacle a seaplane has handling crosswind is related to the seaplane’s weathervaning tendency. There are three primary methods to compensate for this during the initial takeoff run.

Like a landplane, the seaplane pilot will lower the upwind wing with aileron control. However, the seaplane will tend to weathervane into the wind as there is little friction on the water. A method to handle the crosswind is to aim slightly to one side and let the aircraft weathervane some during the initial takeoff run. This method can be used when the winds are fairly light. The main reason for the method is that when the water rudders are lifted, the plane will want to weathervane into the wind. Unless the weathervaning is compensated for, the takeoff path would be to the side of the intended path.

Con: Only useful in light winds.

When to Use: Winds are light, and a specific takeoff path is required.

To help with controllability, the water run could be started into the wind with a turn to crosswind. The plane should be on the step and pointed into the wind and then gradually turned more and more as needed. At this point the air rudder and ailerons should be more effective. To keep the upwind wing down, good aileron use is paramount. This method is useful in stronger crosswinds. If a straight path was used, like in a landplane, the downwind float could dig in when the nose was raised. The downside with this method is that it requires enough room to move in a circular path. A good use of this method would be around the bend of a river or in a confined section of a lake.

When to Use: If room allows, this method should be used as the seaplane is less likely to capsize. 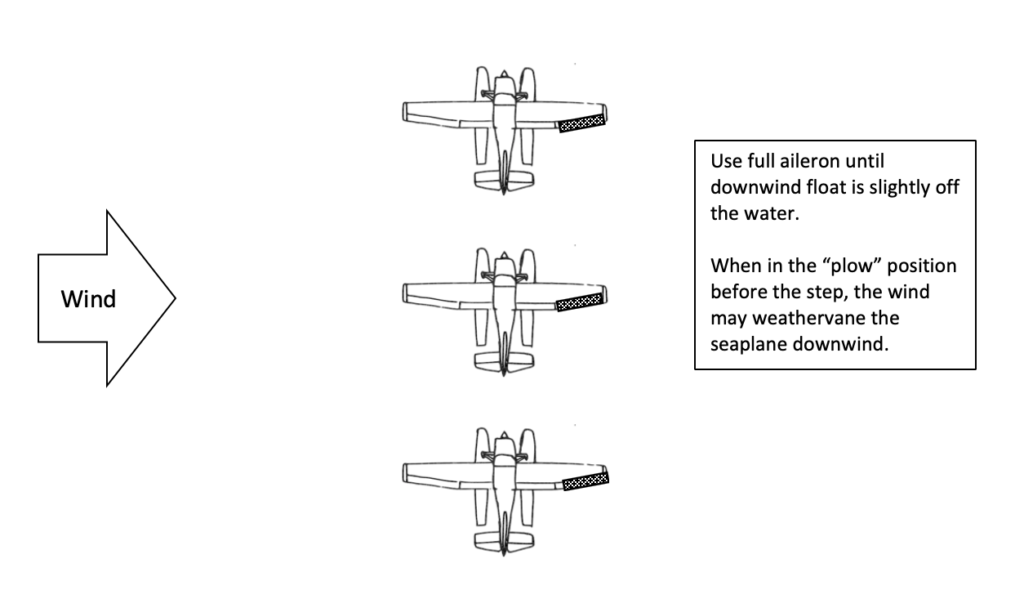 When to Use: Not enough room for other options.

An amphibian taking off on land is handled the same as any other land-based plane. However, the additional surface area of the floats minimizes the amount of crosswind it can handle. In general, a seaplane cannot handle as much crosswind as its land-based brethren.

The two most common methods for crosswind landings are discussed below.

The main concern with crosswind landings in a seaplane is to stop any sideways drift on landing. Like a landplane, the drift can be countered by lowering the upwind wing and applying opposite rudder to keep directional control. This method is primarily used during light winds or if there is an engine failure shortly after takeoff. As the plane slows down, it will be impacted by the crosswind more and more. The plane is most vulnerable when in the plow position during the transition from the step to displacement position. Anticipate this and be prepared with appropriate rudder and aileron inputs. Full aileron should be applied when there is a direct crosswind. 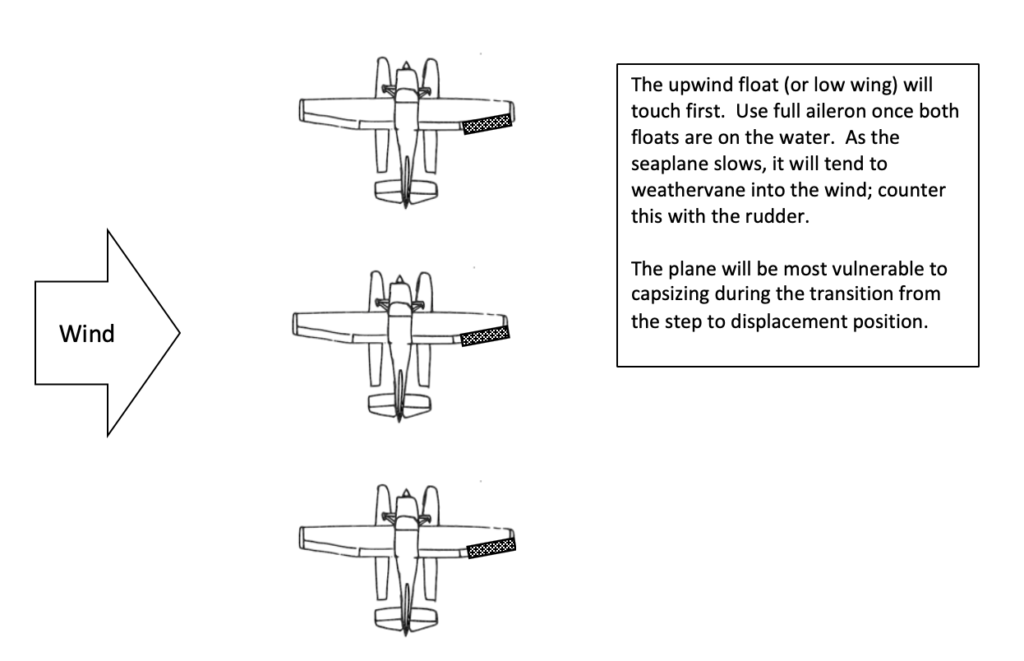 When to Use: Use in light winds or after an engine failure after takeoff.

Landing in a curved path uses centrifugal force to negate the crosswind. The landing is started slightly into the crosswind and turned away from the wind. The arc of the turn will become more pronounced the slower the speed. The airplane will weathervane into the wind once in the displacement position. Like other crosswind maneuvers, the seaplane will be most vulnerable during the plow position between the step and displacement position. The use of full aileron is required.

The curved path creates enough centrifugal force to counteract much of the lifting forces on the upwind wing from the crosswind. The amount of arc comes with practice but should increase further along into the landing. 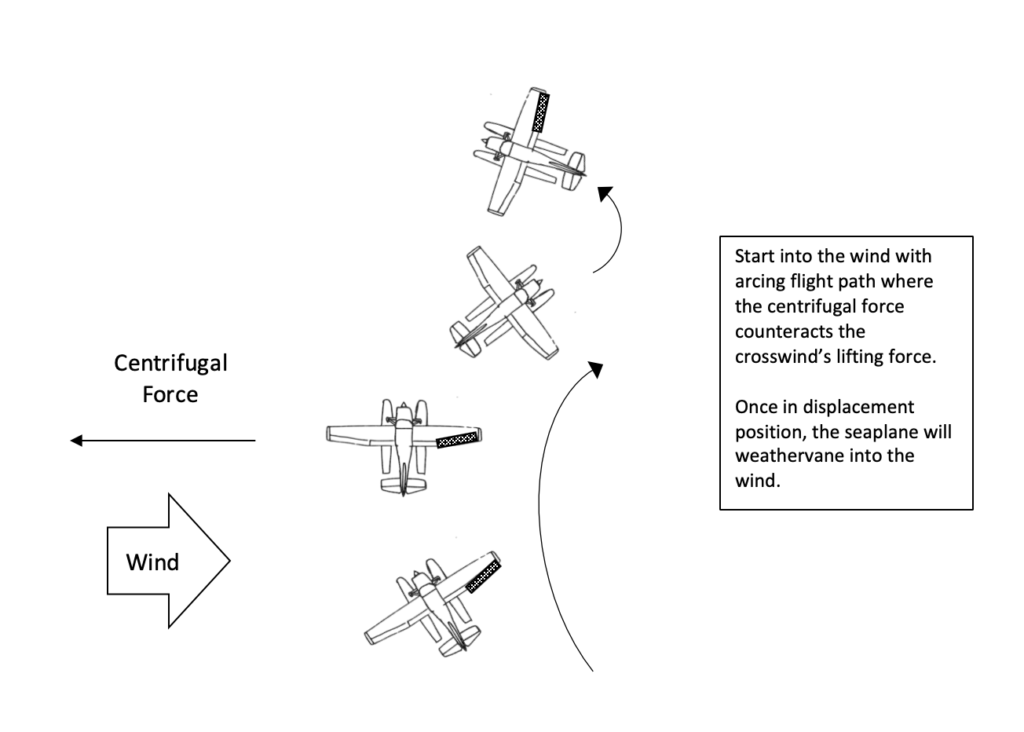 Con: Takes some real estate and this maneuver takes practice.

When to Use: Recommended during all crosswind landings (expect engine out right after takeoff).

The following is a diagram that shows how the curved path takeoffs and landings may look when overlaid on the same area.

Like the crosswind takeoffs, the amphibian on land is very similar to a normal landplane. However, the amphibian will not be able to handle as much crosswind. The large surface area of the floats is impacted more by the wind than the same aircraft without floats. As such, the crosswind component capabilities of the aircraft on floats must be known. The crosswind will also impact the amphibian more than a normal landplane during the roll out. The front caster wheels do not provide resistance to the wind blowing the nose in the direction of the wind. While a taildragger may want to weathervane into the wind as it slows on landing, the amphibian’s nose will try to move with the wind. As the amphibian slows on the runway, there may not be enough rudder authority and differential braking may need to be applied.