During the takeoff run, should the aircraft begin porpoising, the corrective actions are the same as when conducting a step taxi. These actions are discussed under the taxi section.

During the takeoff run, should the aircraft begin porpoising, the corrective actions are the same as when conducting a step taxi. These actions are discussed under the taxi section.

Wind/Water: What is the direction and intensity? Wind indicators outlined in the weather/environmental section should be used.

Wires: Are there any obstacles such as high-line wires? Wires can be difficult to see, so the pilot must pay attention. If there are poles, there are likely wires.
Way In: Is there an obstacle free approach into the area? This review would include identifying a way into the dock, beach, or other designated area.

Way Out: Is there an exit strategy if the approach needs to be aborted? This phase includes identifying how the departure will be conducted after the takeoff. At the same time, an abort point should be identified for the next takeoff.

What If: Are there any other issues, such as boats, jets skis, etc.? As this is a non-airport environment, be prepared for the unexpected.

During the high-reconnaissance, do not lose sight of the landing spot. Keeping the spot in sight, such as out the pilot-side window, minimizes the likelihood of mistaking a similar location as the one the high reconnaissance was just conducted. In addition, to the 5Ws, there are a few other points to remember. 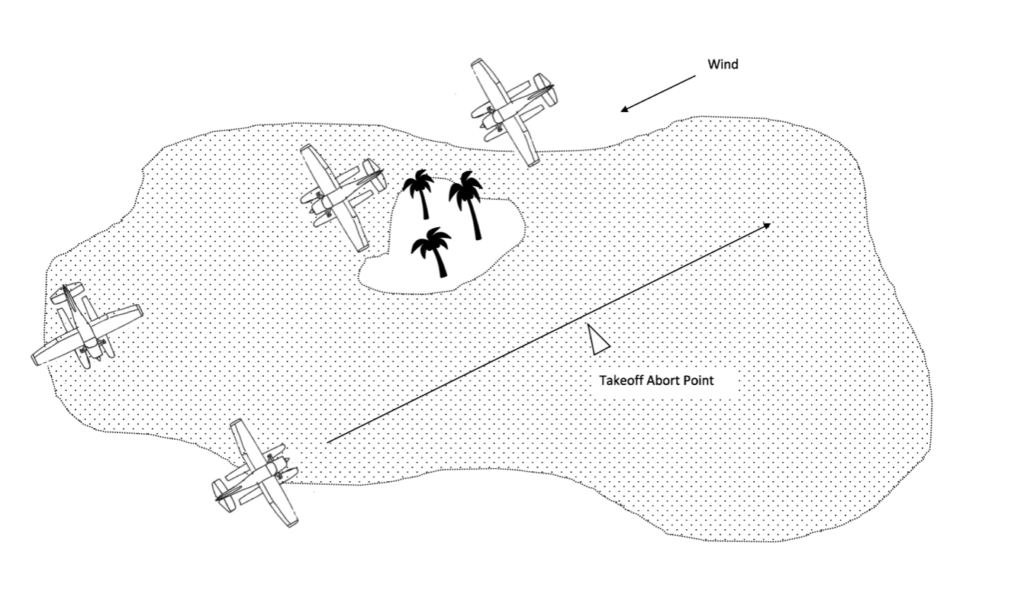 Due to excessive speed and an improper pitch attitude at touch down with the water, the plane may bounce upon contact with the water. This bounce is known as “skipping”. Unlike a porpoise, the skip is a hard bounce from wave to wave. Basically, the floats are skipping on the water much like skipping a stone across a pond.

A primary factor with skipping is excess speed on landing and an improper attitude. With glassy water, excess speed and a low pitch attitude may cause the floats to skip on the water. During non-glassy water conditions, skipping can occur with too much speed and a higher than normal pitch attitude. The seaplane will bounce from wave to wave. Although it can be confused as a porpoise, skipping is a hard bounce while the porpoise is more of a rocking motion.

To correct for skipping, back pressure on the elevator control is increased and sufficient power is added to prevent the floats from contacting the water. The proper pitch attitude is established, and power is reduced gradually to allow the seaplane to settle gently onto the water. Skipping oscillations do not tend to increase in amplitude, as in porpoising, but they do subject the floats and airframe to unnecessary pounding and can lead to porpoising.

Although skipping primarily occurs during landing, it can occur anytime the seaplane is on the step. However, current float designs are not as susceptible to skipping as older designs. Skipping is unlikely to occur, and is hard to demonstrate, but the pilot should understand the concept and how to address it should it occur.

Next Section – Crosswind Takeoffs and Landings