Seaplane performance is determined by many of the same variables familiar to the landplane pilot, though the seaplane will be impacted by them to a greater degree. In addition, some of these variables, such as wind and density altitude are harder to calculate in an off-airport environment. The primary variables that cause performance issues with the seaplane relate to water drag on takeoff and landing. Water drag increases exponentially with ground speed. Anything that causes increased ground speed will significantly increase water drag and have a negative effect on the seaplane’s performance. The primary factors addressing water drag include:

Each of these items will be addressed separately.

In addition to these factors, the seaplane is less forgiving of poor pilot technique. Pilot technique is a critical factor when margins are smaller, such as operating with heavy loads, high density altitude, or glassy water conditions.

Weight and balance (W&B) concepts are the same for seaplanes as for other aircraft. The seaplane must have the center of gravity within approved limits. There are also some W&B concerns specific to seaplanes.

Like a landplane, the seaplane benefits from taking off and landing into the wind. The velocity of the wind increases the coefficient of lift without an increase in ground speed. As such, the increased headwind reduces the ground speed needed for the same amount of lift. So the seaplane pilot should take off and land into the wind in most cases. There are some exceptions to this rule when operating on rivers. Taking off or landing with a tailwind requires an increase in ground speed to overcome the tailwind. This increase in ground speed comes with a significant drag penalty due to the water drag increasing exponentially as speed increases. On takeoff the increased drag may make it difficult for the airplane to obtain takeoff speed. On landing, the drag on the floats may be significant and more than the pilot and/or controls are able to counteract. In such circumstances, the bows of the floats may submerge with disastrous results.

The water surface can play a major role in the drag imparted on the floats. Smooth water, or glassy water, causes more drag than water with some waves or ripples. Glassy water is caused by lack of wind or other turbulence. In addition to the missing benefit of a headwind, the smooth water has an increased surface tension on the floats causing more drag.

Density altitude can be calculated in a few steps. In many areas, a nearby AWOS/ASOS system is available to give the density altitude, but the steps below are how this is determined.

2) Calculate the Standard Temperature for the area

In our Example the field elevation is 1020 feet.

Note: The variance from standard is often listed in aviation weather products.

So, in the example above, a field elevation of 1,020 feet at 33 degrees Celsius (93 Fahrenheit) would result in a density altitude of 3,240 feet. Such a difference will significantly impact the aircrafts performance.

For training, a high-density altitude environment can be simulated by practicing takeoffs without using full power. There should be a waterway for this practice as this will take much more real estate. In addition, this practice should be minimized as heat can build up in the engine.

When operating a seaplane away from home, there are some additional considerations for a seaplane on straight floats. At a minimum, the pilot should:

For amphibian aircraft, the primary issue is storage and ground movement of the aircraft if there is an extended stay at a location. Call ahead or bring an appropriate tow bar. If the plane is to be secured in a hangar, ensure that the ramp personnel are aware of the dimensions of the seaplane. An amphibian is much taller than most other general aviation aircraft. Also, consider fueling the aircraft personally. Ramp personnel that are likely not familiar with seaplanes may use the fuel nozzle as an extra hand hold, which may damage the fuel inlet.

When flying a seaplane, the pilot needs to understand where they can land. Amphibian operations on land are no different than land-based aircraft. However, water landings are another story. Below are a few items with relation to water landings for all seaplanes.

Emergency: In an emergency, any feasible body of water can be used. The landing should be reported to authorities as applicable.

Feasibility: Ensure that the body of water is free of obstacles and is an appropriate length and depth for the aircraft being flown.

Approval: To avoid problems, plan ahead and know if the body of water where the anticipated landing is planned is approved for seaplane operations. Unless under federal jurisdiction, navigable bodies of water are under the jurisdiction of the state, or in a few cases, privately owned. Aircraft have as much right to operate on these bodies of water as other vessels unless the body of water is specifically restricted. Check with federal, state, or local officials in advance of operating on unfamiliar waters. Below are several resources for determining if seaplane landings are allowed on a specific waterway.

A designated sea base will be identified on a chart with an anchor symbol. The basic anchor has minimal services, if any. The anchor with the circle and tick marks has services, such as fuel. The top of the anchor, space permitting, is located at the primary base. Examples are below. There are designations for military sea bases, but there are no such active bases in the U.S. 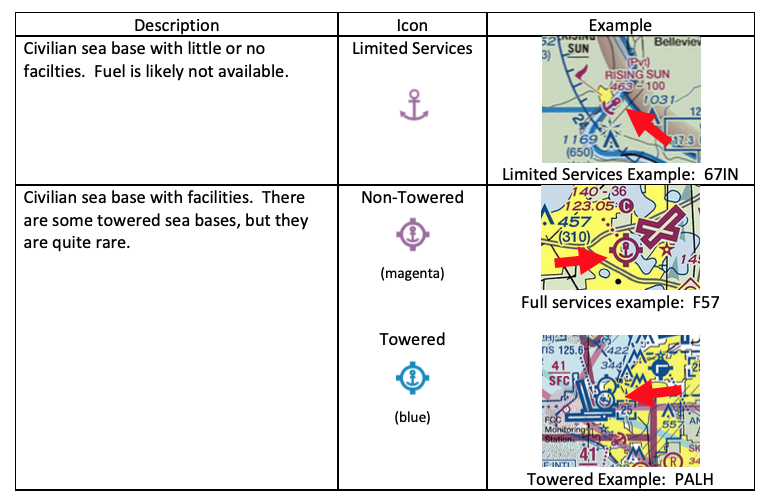 Some sea bases may have an anchor symbol visible from the air. This anchor may be painted on a roof or other visible area. The size of the anchor is about 13ft by 8ft.

It is very unlikely that a new seaplane pilot will find a seaplane that requires a type rating, but there are a few large transport seaplanes primarily used in firefighting that do require type ratings.

To be current for solo flight, or to act as pilot in command, the pilot must have a current flight review. The flight review can be conducted in any category or class of aircraft. If conducting a flight review in a landplane, the pilot will have renewed their seaplane category as well, and vice versa.

Seaplane Base: A designated area of water used or intended to be used for the landing and takeoff of seaplanes and shore side access. It also may include water taxi channels, anchoring locations, ramp service, and possibly on-shore facilities for pilots, passengers and aircraft needs.

Seaplane Landing Area: Any water area designated for the landing of seaplanes.

What are two primary concerns when determining whether to use a water landing area? Two primary concerns when identifying a landing area are feasibility of the area and authority to land there. Ensure the water has adequate length and depth and is free of obstacles. Unless it’s an emergency landing, the pilot should ensure they have authority to land on that body of water.

How does a pilot know if they can legally land on a body of water? First, the pilot must determine who controls the body of water. A primary source is the Seaplane Pilots Association’s Water Landing Directory. Seaplane bases/facilities are located in the Chart Supplement (f/k/a Airport Facilities Directory). The National Park Service oversees waterways in national parks. The U.S. Forest services does the same for wilderness areas and national forests. The Army Corps of Engineers is responsible for overseeing seaplane activity on waterways they manage. In addition, the pilot may need to contact local or state offices.

How does a pilot maintain currency to carry passengers in a seaplane? A pilot must make three takeoffs and three landings in a seaplane. Currency must be in the same category (Airplane) and Class (Seaplane) and type if a type rating is required.

A pilot is flying an amphibian, but all of the flights have been from the water for the last 90 days, is the pilot legal to take passengers from a land runway? No, the pilot must be current in land operations, so the pilot must make three takeoffs and three landings in the land configuration on a runway. The water operations do not count for land-based currency.