Taxi operations with a seaplane have some unique characteristics. The seaplane pilot must know how to properly handle the aircraft. For all seaplanes, there are three primary taxi positions while on the water. These are the Idle or Displacement Taxi, Plow Taxi, and Step Taxi.

Aileron control is a must while taxiing on the water. The concepts are the same as the landplane, but the consequences of poor pilot technique are more severe.

The idle taxi is the primary method of moving the aircraft on the water at slow speeds. When in an idle taxi, the seaplane will sit level in the water. During idle taxi, the all of the aircraft’s weight is supported by the floats. The water rudders are kept down to combat weathervaning. To minimize water spray on the propeller, the engine should be operated at less than 1,000 RPM. The low RPM helps keep the engine cool as there is little airflow at this speed.

The plow taxi should be avoided unless necessary to avoid obstacles. In a plow taxi, the elevator is pulled back and some power applied. These actions will raise the nose, which moves the center of buoyancy aft. In this position, the seaplane will weathervane with the wind, opposite of its normal behavior. This tendency can be useful if needed to avoid obstacles, especially when operating in windy conditions. However, it comes at a cost. The plowing position causes a lot of water spray and is hard on the engine due to the high-power settings and lack of cooling airflow. The nose-high attitude also makes it difficult to see in front of the aircraft. The plow taxi is primarily used to conduct a plow turn which is detailed in the next section. 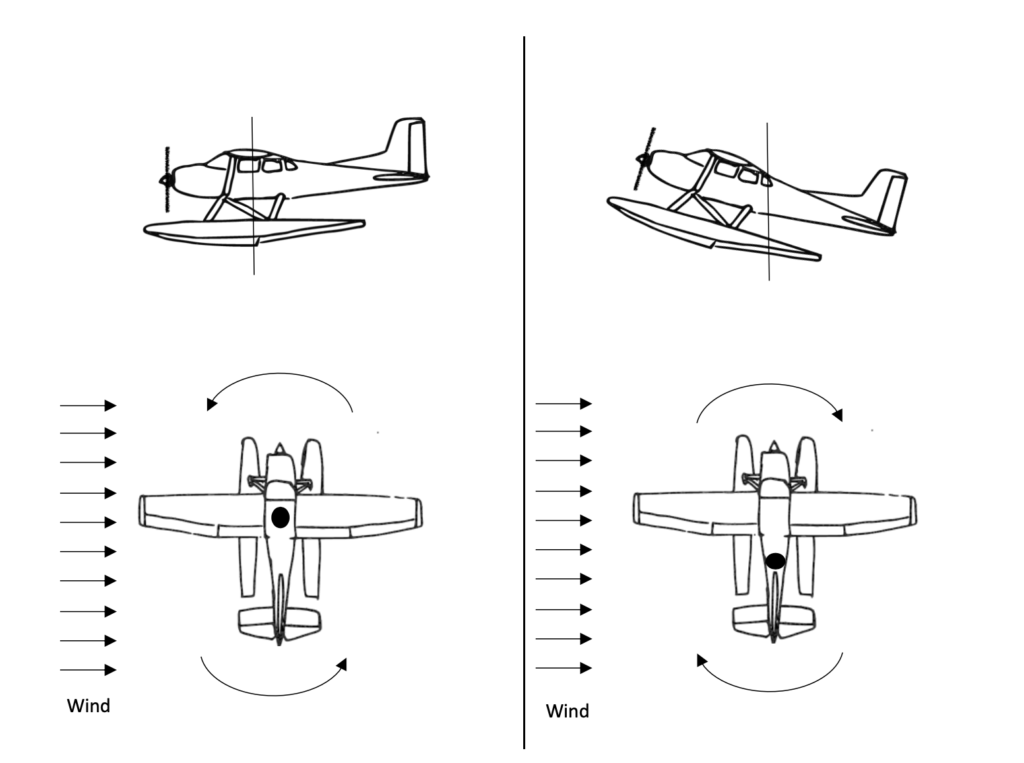 As with a plow taxi, plow turns are hard on the engine and propeller. Although plow turns should be avoided during normal maneuvering, if one is needed, proper technique is essential. As noted in the plow taxi section, the plowing position is damaging to the propeller due to water spray and is difficult on the engine as there is high power and low airflow.

If conducting a plow turn, the turn should be conducted to the left. The left turn uses the left-turning tendencies of the aircraft. As the plow turn is used to turn against the wind, getting all available assistance is beneficial. Although the overall turn is performed to the left, the initial turn is to the right, and then the momentum is used to bring the aircraft around. The turn looks much like a question mark if viewed from above. During this maneuver, proper aileron use is critical. As the maneuver is conducted in higher than normal winds, the windward wing must be kept from rising. 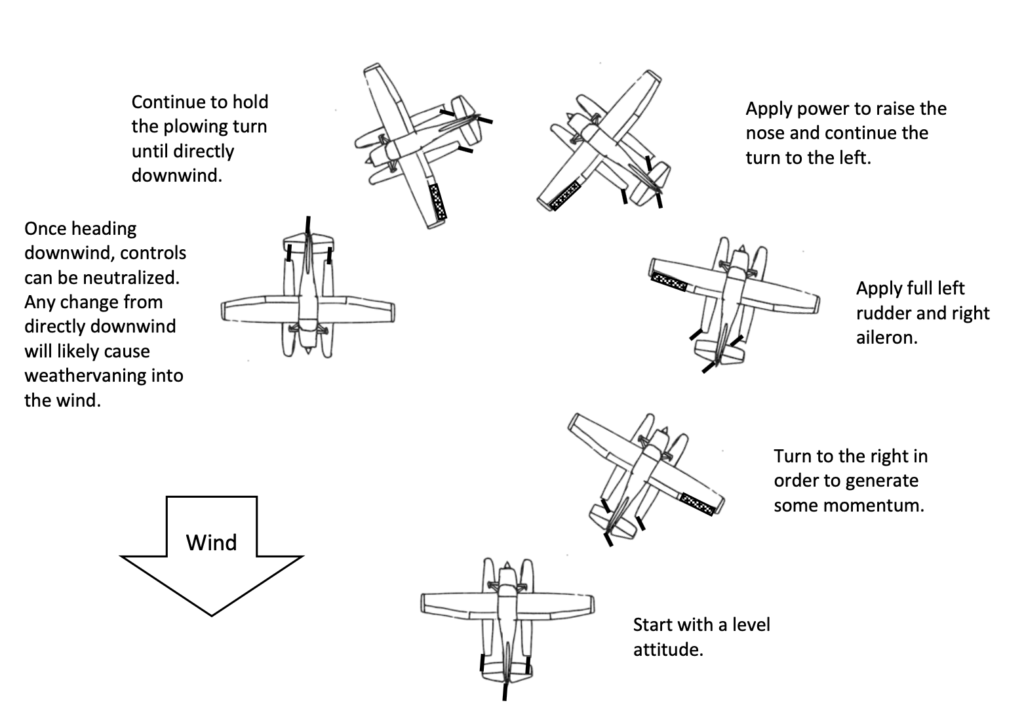 The step taxi is used to move the aircraft on the water at higher speeds than the displacement taxi. To step taxi, the aircraft is operated at somewhere above 25 knots and less than takeoff speed, depending on the aircraft. The step taxi is essentially a takeoff run, but without actually taking off. Once on the step, the aircraft is in a planing position. At this point, the majority of the aircraft’s weight is supported by hydrodynamic lift the floats and aerodynamic lift from the wings. As discussed in the next section, turns from downwind to upwind should be avoided. In most cases, the water rudders are up during step taxi to avoid damage. During the step taxi, improper pilot technique may lead to porpoising or skipping, which are discussed separately. If step taxiing is frequently required, consider landing closer to intended destination.

During a step taxi, turns may be conducted, but there are some serious considerations.

Sometimes when on the step, during a step taxi or takeoff run, the seaplane may start to porpoise. A porpoise is caused when the nose is either too high or too low. This undesired condition usually relates to incorrect pilot input on the elevator. This commonly occurs when the seaplane completes its second rise during the takeoff run and the pilot either does not release pressure or pushes the nose over too much. The following are the pilot’s control actions for the various conditions.:

Should the porpoising not stop quickly, cut power and return to a displacement taxi.

Skipping is when the aircraft bounces from wave to wave. Although skipping can occur while on the step, it is more likely to occur with a poor aircraft attitude during landing. As such, skipping is discussed in detail under the landing section. Should skipping occur during a step taxi or takeoff run, power should be reduced, and the aircraft returned to a displacement taxi.

There are some additional items related specifically to taxiing an amphibious aircraft. These include the following:

Sailing allows the seaplane to move backwards or sideways depending on the use of power, if any. Sailing provides alternatives to the pilot instead of taxiing downwind. In most cases, sailing should be used instead of a plow turn.

The following are different aircraft controls to sail in different directions with the same wind. 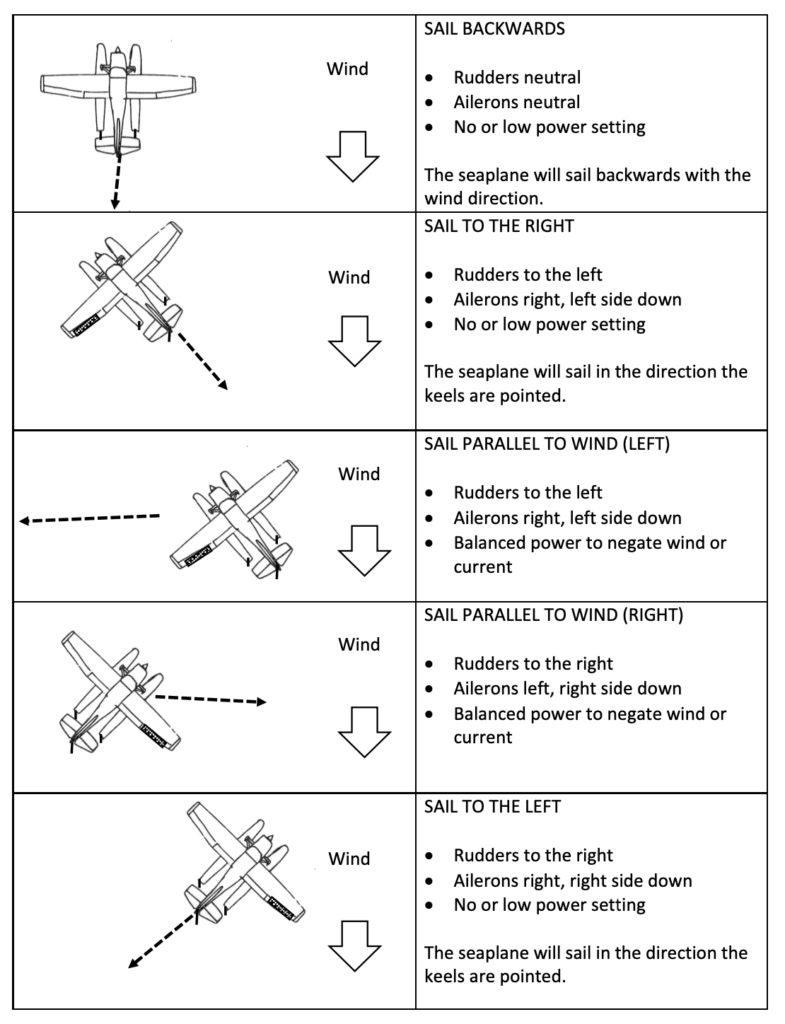 Unless sailing directly backwards, controls will be crossed. To move in the opposite direction, the controls would be reversed. However, most sailing would be done backward and to one side, such as backing into a protected cove. It is easier to keep the keels pointed in one direction and modify power than to try and point the keels in the opposite direction. With proper planning, the pilot can minimize the amount of sailing.

TIP: To help remember the aileron positions, it can be helpful for the new seaplane pilot to use the rudder to point the nose and then use ailerons in the opposite direction. 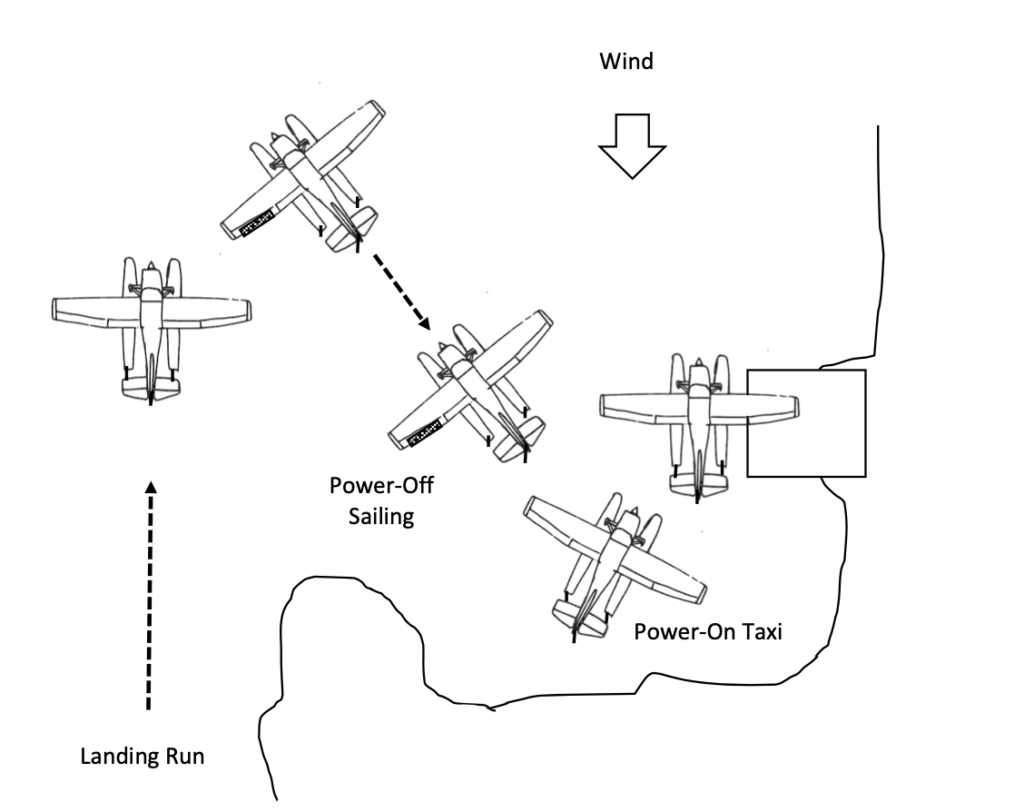 Center of Buoyancy: The average point of buoyancy in floating objects. Weight added above this point will cause the floating object to sit deeper in the water in a level attitude.

Keel Effect: When sailing, this force aligns movement of the aircraft along the water in the direction of the keels.

Planing Position: The attitude of the seaplane when the entire weight of the aircraft is supported by hydrodynamic lift, as it is during high-speed taxi or just prior to takeoff. This position produces the least amount of water drag. Also called the step position, or on the step.

Plowing Position: A nose-high, powered taxi characterized by high water drag and an aftward shift of the center of buoyancy. The weight of the seaplane is supported primarily by the buoyancy and partially by hydrodynamic lift.

Porpoising: A rhythmic pitching motion caused by an incorrect planing attitude during takeoff.

Sailing: Using the wind as the main motive force while on the water.

Skipping: Successive sharp bounces along the water surface caused by excessive speed or an improper planing attitude when the seaplane is on the step.

Step Position: The attitude of the seaplane when the entire weight of the aircraft is supported by hydrodynamic and aerodynamic lift, as it is during high-speed taxi or just prior to takeoff. This position produces the least amount of water drag. Also called the planing position.

Why would a pilot conduct a plow turn? The plow turn is used to turn downwind when the water rudders are ineffective.

Why should a pilot avoid a plow taxi? Plow taxiing can cause damaging spray on the propeller and heats up the engine due to low airflow. If there is enough wind to warrant a plow taxi, sailing is often the better option.

Why does the plane turn downwind when conducting a plow taxi and into the wind during idle taxi? The reason the plow taxi turns downwind is that the center of buoyancy is further back. With the center of buoyancy further back, there is more surface area in front of the pivot point. The wind acting on this part of the aircraft will point it downwind.

At what speed should a step taxi be conducted? A step taxi is conducted at a speed that ensures that aircraft is on the step (generally greater than 25 knots) but less than takeoff speed. New pilots should use the minimum speed so as to avoid an inadvertent takeoff.

How does the pilot handle porpoising during a step taxi? If the seaplane begins to porpoise, determine if it is because the nose it too high or too low. If too high, elevator pressure should be decreased. If the nose is too low, aft elevator pressure should be increased. If pilot actions do not diminish the porpoising, the power should be reduced to idle. DO NOT try to counteract the porpoising with varying control inputs. It is very difficult to time correctly and will usually increase the problem.

When might a pilot raise the water rudders during an idle taxi? Water rudders may be raised during idle taxi to allow the aircraft to pivot into the wind rather than move in an arc. It can also be helpful to confirm the wind direction.

What direction are plow turns usually made? Due to the left turning tendency of the airplane, plow turns are much easier to the left. Plan all taxi maneuvers to be accomplished in the easiest way.

When would a pilot taxi with the water rudders up? Water rudders should be retracted when step taxiing, sailing, or in idle taxi through vegetation.

Why might a pilot lower the flaps when sailing? In order to increase sailing speed, the flaps may be lowered to increase the surface area affected by the wind. The doors may be opened as well.

What is the purpose of the ailerons while sailing? Aileron inputs increase drag which helps point the tail of the aircraft in the desired direction. The down aileron moves more than the up aileron, so the down aileron creates more drag. In addition, proper aileron use helps keep the upwind wing from rising.

Next Section – Takeoffs and Landings