Given that the seaplane pilot is conducting off-airport operations, the pilot is unlikely to have the traditional wind indicators that accompany most airports, such as windsocks, automated weather broadcasts, etc. As such, the seaplane pilot must become skilled at reading the direction and intensity of the wind. 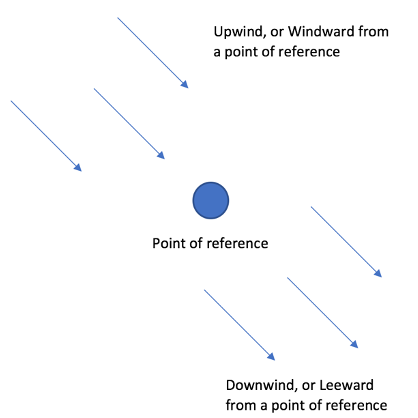 Windward and Leeward: These terms are used in water-borne activities such as boating and seaplane flying. The terms are used to describe a location based on the wind direction.

Many aspects of seaplane flying will reference the windward or leeward side. 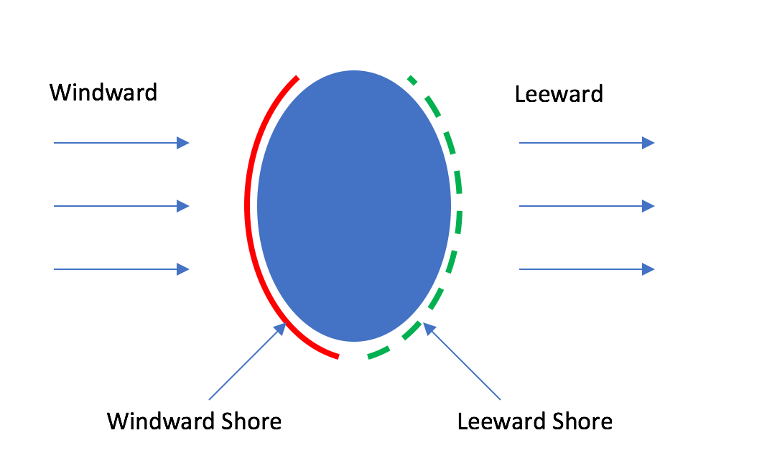 Wave size is determined primarily by the wind velocity, fetch and duration. The fetch is the distance over water which the wind blows without appreciable change in direction. There are several indications to determine the wind strength. With little or no wind, the water will be glassy. As the wind increases, ripples will start at 3-5 knots. These ripples run perpendicular to the wind. Streaks will form around 8 knots. These streaks determine the alignment, but the direction will still need to be identified. A clear band will generally form on the upwind side of the body of water. Around 12-15 knots, whitecaps will form. These various scenarios are illustrated below.

The larger the body of water, the more the wind can impact the waves. The downwind area will have larger waves as a result. Use a small body of water to get a good reference, these can generally show all of the wind conditions. In a larger body, the geologic features can give misleading information.

Catspaws are a term used to describe the waves in the water formed from a gust of wind or
downdraft. The presence of these ripples should indicate to the pilot a potential wind gust.

Strongly consider establishing a formal wind limit to cease seaplane operations. A good rule would be to stop at 15 knots. Above 15 knots, the impact to the aircraft is significant and the passenger experience would likely be negative. If whitecaps are observed, cancelling or delaying the flight should be considered. Advanced pilots may operate beyond this limit, but such operations should be avoided for new seaplane pilots. Like other types of flying, seaplane pilots should establish personal minimums or limits.

In addition to the scale outlined above, mariners often use the Beaufort scale. However, the additional categories can be difficult to distinguish for a seaplane pilot. The Beaufort scale is listed in the appendix.

The weather can change during the day. Local patterns often prevail, but the wind is usually less during the morning or late evening hours.

Beaufort Wind Scale: A standardized scale ranging from 0-12 correlating the velocity of the wind with predictable surface features of the water.

Crest: The top of a wave.

Fetch: An area where wind is generating waves on the water surface. Also, the distance the waves have been driven by the wind blowing in a constant direction without obstruction.

Glassy Water: A calm water surface with no distinguishable surface features, with a glassy or mirror like appearance.

Leeward: Away from the wind, or the downwind side of an object.

Sea Breeze: A sea breeze is a coastal local wind that blows from sea to land, and caused by temperature differences when the sea surface is colder than the adjacent land. Sea breezes usually blow on relatively calm, sunny, summer days.

Weathercock: The tendency of an aircraft to turn until it points into the wind, same as weathervaning.

Weathervaning: The tendency of an aircraft to turn until it points into the wind, same as weathercock.

Windward: Toward the wind, or the upwind side of an object.

How can the pilot tell the wind direction? Some common methods include wind streak directions, white caps, smoke/flags, waves (smooth on protected side).

How can the pilot tell the wind direction while on the water? If the water rudders are retracted while in displacement taxi, the aircraft should weathervane into the wind. Other wind indicators, such as wave direction, flags, smoke, etc., may also be used.

When might the weather be calmer? Early in the morning or in the evening.