A seaplane pilot should become familiar with all facets of water movement. This is one area where experience really pays off. Becoming better at moving the seaplane on the water will provide a better experience for passengers and decrease the likelihood of damage to the aircraft. Additional water-based tasks performed by the seaplane pilot include docking, mooring, and ramping.

Navigating to the dock, ramp, or other

Many times, a seaplane will be secured in a facility with a dock, ramp, or mooring buoy within a marina or harbor. The nature of these facilities means that the pilot will likely need to navigate the seaplane near obstacles such as other docks, pilings, jetties, seawalls, etc. A combination of taxiing and sailing can be used to approach safely. Below are some items to consider.

Docking a seaplane is similar to docking a boat, with one exception. For most seaplanes, the engine needs to be shut off while approaching the dock in order to slow down. There are a few other considerations when docking.

Below are some examples of docking. The options are varied, but a combination of taxiing and sailing will allow safe access to most docks.

The seaplane’s weathervaning tendency should be used to the pilot’s advantage. Plan ahead. In this case, approach so that the turn into the wind does not push the aircraft away from the dock.

Using the same dock, but with an obstacle, such as an anchored boat, the pilot may be better off sailing back into position. Such a situation is why it is a good idea to learn how to sail. 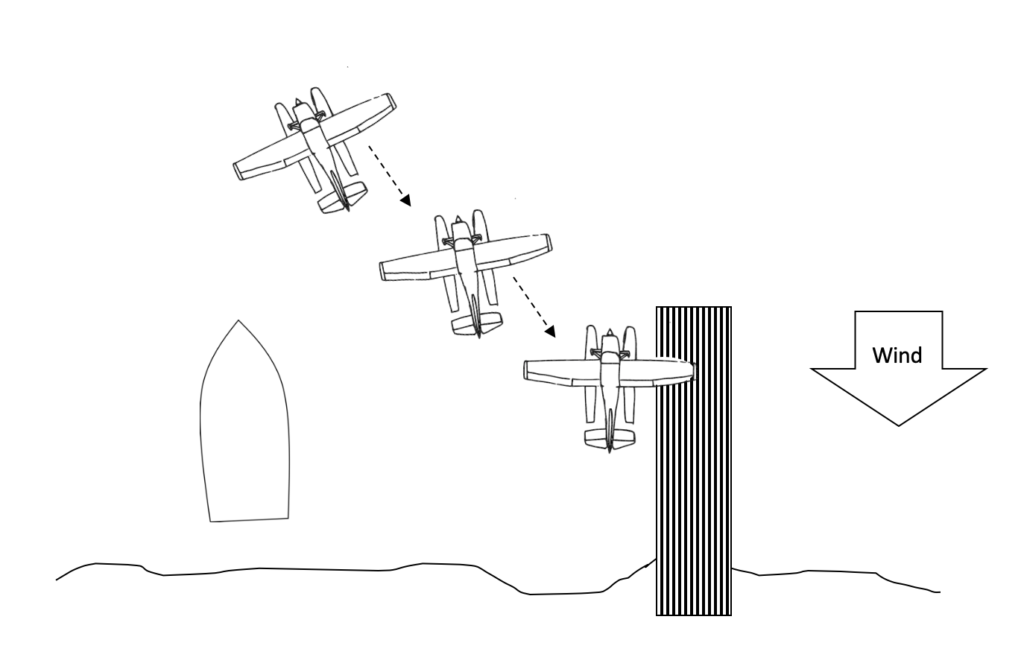 The landing and taxi should be planned to set the pilot up for success. If the wind is parallel to the ramp, the ramp should be approached downwind so that the turn to the ramp takes advantage of the weathervaning tendencies of the seaplane. The pilot should: 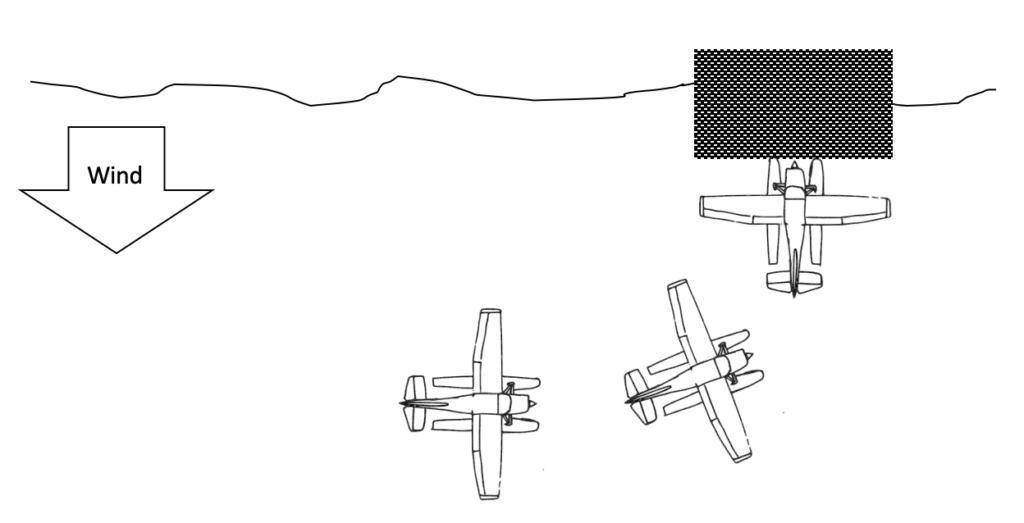 Like other operations, the weathervaning tendencies should be used to the pilot’s advantage. In the example above, the plane should be taxied straight to the ramp, or the last turn to the ramp should be into the wind. 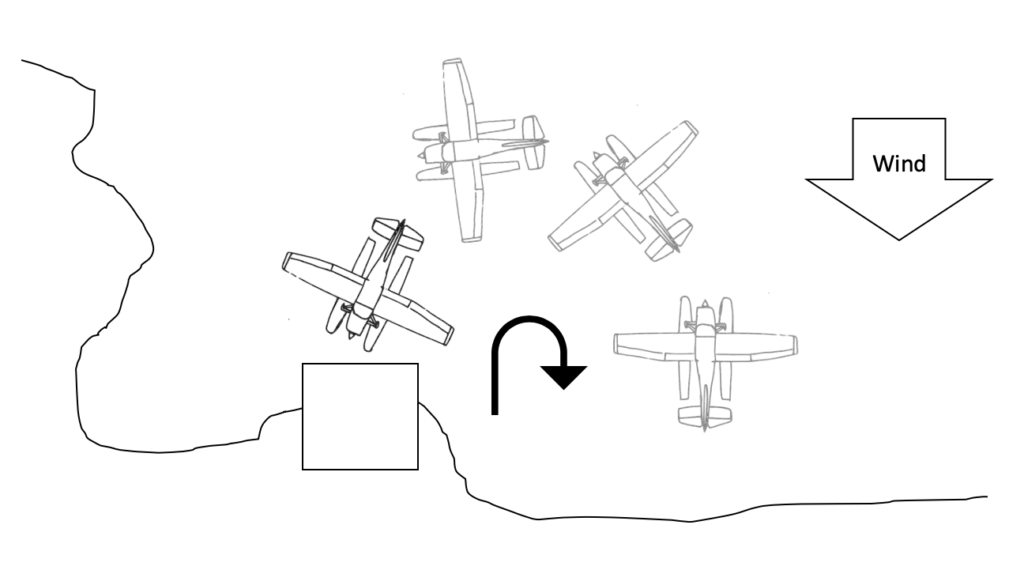 Another option would be to physically turn the aircraft around on the ramp before departing. This way, it could be just taxied off the ramp and taxied straight into the wind.

Beaching is the act of bringing the seaplane to the shoreline. A primary concern is to ensure that the beach it appropriate for such activity. The beach should have a gentle soft slope. Any beaches that are rocky or contain significant amounts of vegetation should be avoided. The wind will determine how to approach the beach. The three primary conditions are detailed below.

Nose In: Directly Into the wind

If the wind is coming from the shore, the aircraft can be idle taxied all the way to the beach. When nearing the beach, the water rudders should be lifted. Once on the beach, the seaplane can be manually turned around for departure. 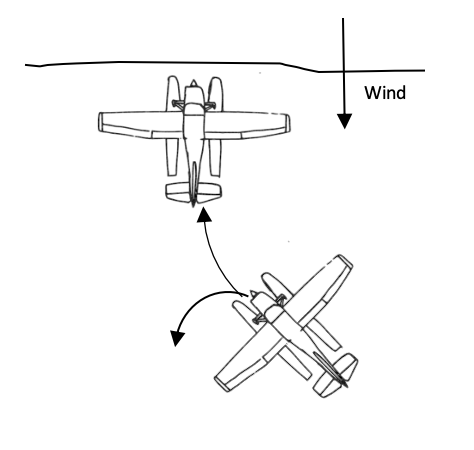 The approach should be at a slight angle and then straightened out. Arriving at an angle allows the pilot to inspect the beach and ensure that it is acceptable and won’t damage the floats. If the pilot sees something they don’t like, they can turn away much easier than if at 90 degrees to the shore. This is especially needed with amphibious aircraft as the gear mechanism could be more easily damaged than straight floats.

Crosswind: Wind blowing along the shore

If the wind is blowing along shore, it is best to parallel the shore downwind and then turn towards the shore so that float contact is made to bring aircraft perpendicular to the shore. This should not be attempted in strong crosswinds as is may be difficult to control. With practice, the pilot should find the right timing and power settings to handle stronger and stronger crosswinds.

Sail In: Wind blowing towards the beach. 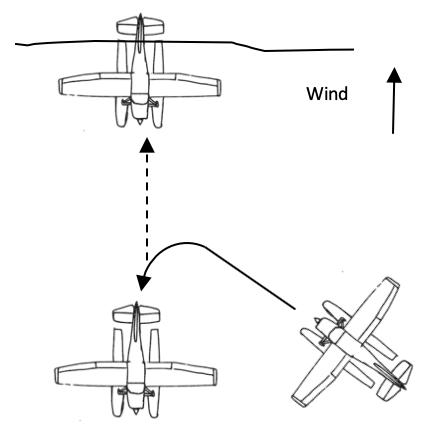 If the wind is blowing towards the beach, it is better to get close to the beach, then turn and sails backwards the final 100 feet or so. Ensure the water rudders are up. This should be done when sailing anyway, but it is really important when beaching, to avoid damaging the water rudders.

The longer the sailing portion, the more difficult it will be to beach on the designated spot. Sailing the shortest distance possible is better.

Mooring is the process of securing the seaplane to a buoy. This task is similar to docking but approaching a buoy instead of a dock. Approach a buoy on the outside of the floats. Do not ever straddle a buoy. Whenever possible, make the final positioning into the wind.

To secure the aircraft on the water or on the beach, it should be anchored. The choice of anchor type depends to the pilot, but the Lewmar Claw or Bruce anchor works well for seaplanes. They are light weight and provide good holding power. Below are some considerations for anchoring.

Anchor: A heavy hook connected to the seaplane by a line or cable, intended to dig into the bottom and keep the seaplane from drifting.

Beaching: Pulling a seaplane up onto a suitable shore so that its weight is supported by relatively dry ground rather than water.

Dock: To secure a seaplane to a permanent structure fixed to the shore. As a noun, the platform or structure to which the seaplane is secured.

Moor: To secure or tie the seaplane to a dock, buoy, or other stationary object on the surface.

Ramping: Using a ramp that extends under the water surface as a means of getting the seaplane out of the water and onto the shore. The seaplane is typically driven under power onto the ramp and slides partway up the ramp due to inertia and engine thrust.

How should a beach be approached if the wind is blowing towards the shore? The beach should be approached at a 45-degree angle and with a turn into the wind and then a sail backwards to the beach. The sailing portion would be about 100 feet.

What is a concern with an amphibian when beaching? The landing gear is more fragile than straight floats so do not hit anything on the beach.

What is a concern with an amphibian for securing in the water? Do not leave the amphibian in the water for long periods of time. Water is hard on submerged landing gear. The benefit of the amphibian is that it can be taken onto land. Take advantage of that capability.